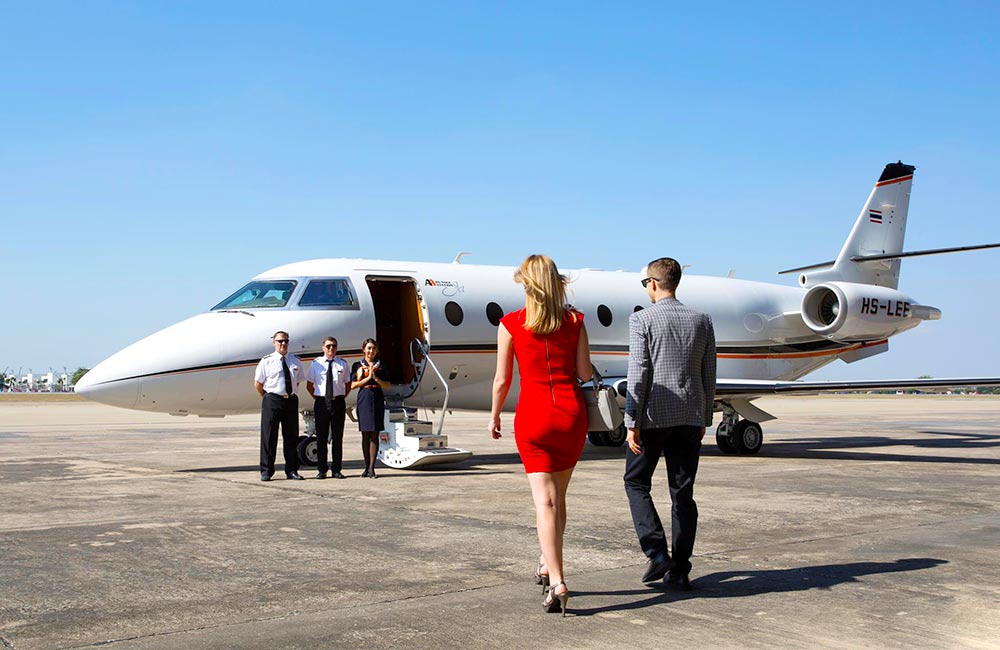 For individuals who believe the sky is the limit.

The highest of safety standards, world-class service and a personal touch are the things about us that have allowed MJets to continue to lead private aviation in Thailand and South-East Asia.

For individuals who believe the sky is the limit.

Soaring with passion. Making the most of every moment. Charting forward with life on your own terms. MJETS empowers our clientele to take control of their own time and travel with ease, in a style personalised to their needs, and with unparalleled exacting standards of service.

“We provide every customer with the highest international standards in safety, privacy and comfort, combined with exceptionally personalized attention to detail”

MJETS was born from a passion for aviation. The company was launched in the nineties by entrepreneur William E. Heinecke  and joined by veteran investor Kirit Shah, another of Thailand’s most accomplished business leaders, in 2007.

MJETS rose onwards and upwards, expanding its fleet, establishing the first and only private jet terminal and Fixed Base Operation (FBO) facility in Thailand, moving into new markets including Myanmar and India, and continuing to expand its portfolio of private aviation-centred business lines.

2007 : MJets commenced operations under the name Minor Aviation Limited with two aircraft in its fleet as a corporate flight department for its shareholders: Mr. William E Heinecke of Minor International PCL and Mr. Kirit Shah of G.Premjee Co., Ltd

2009 : Introduction of the fastest civilian jet in the world; the Cessna Citation X to MJets’ fleet

2010 : In March, MJets officially launched the first and only fixed-base operation (FBO) in Thailand and appointed a Cessna Authorized service facility whilst acquiring its second aircraft management deal

2012 : Despite major difficulties caused by a historic flood the previous year, MJets impressively expanded its charter fleet to 5 aircraft. Adding the ultra-long range Gulfstream G-V to its fleet as well as the Citation Bravo – a dedicated aircraft for MJets latest business line: Air Ambulance

2013 : MJets ground handling handled a record number of movements though its private jet terminal whilst the aircraft management division grew by 6 aircraft. Totalling a fleet of 10 aircraft MJets has consolidated its position as the leading private jet operator in Thailand

2014 : MJets has begun expansion into neighbouring Myanmar with completion of the MJets Myanmar Business Aviation Centre (MM-BAC) set for June

2015 : In 2015, MJets became the first aviation company in all of Southeast Asia, and third in the world, to earn both the IS-BAO and IS-BAH certifications – the highest safety and quality certifications from the International Business Aviation Council and the National Air Transportation Association. Besides, MJets also earn EASA TCO certification for its Thai AOC.

2016 : MJets moved to new full service FBO facilities with a 3,400 sq ft. lounge and 52,000 sq. ft. of hangar space. In February, MJets won the Luxury Lifestyle Awards 2015 Asia for Luxury Aviation. Later,  Aviation International News  (AIN) named MJets as the best FBO in asia and 4th best in the entire eastern hemisphere from the results of its 2015 survey. In August, MJets  had been certified by The Federal Aviation Administration(FAA) as a Part 145 Repair Stationunder the brand of Western-MJets. Moreover, MJets added another Citation Bravo to its fleet for an Air Ambulance service.

Weaving close attention to detail with a warm Thai welcome the multi-lingual in-flight service team at MJets delivers world-class service. Through our affiliation with Minor Hotel Group, crew training with the luxury five-star Anantara Hotels & Resorts becomes evident in the fine-dining experience on-board that is tailored to each client and itinerary. Dedicated to providing the ultimate in-flight experience without ever compromising your absolute well-being, our entire team undergoes extensive safety training. With a combined vast experience from some of the best airlines in the world, maximum client satisfaction underpins our service at every point from departure to arrival at your destination.

When you dance you can enjoy the luxury of being you.
– Paulo Coelho

True luxury is being able to own your time – to be able to take a walk, sit on your porch, read the paper, not take the call, not be compelled by obligation.