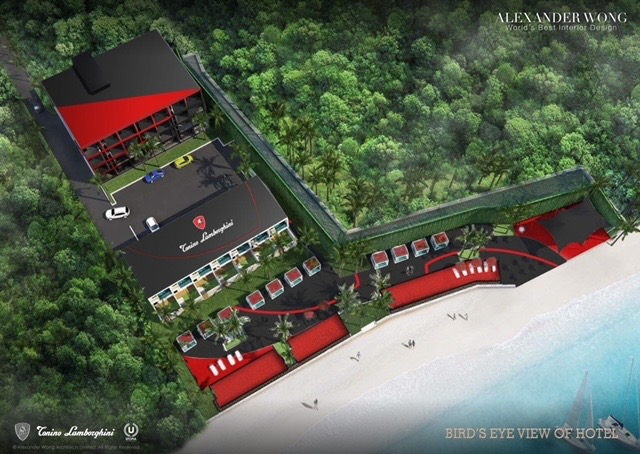 Utopia Corporation, Phuket’s leading property developer, is no stranger to pioneering prestigious real estate projects; this innovative company has successfully introduced the island’s first themed condos and residences and recently unveiled plans to launch a luxury boutique hotel in partnership with Tonino Lamborghini, the legendary Italian designer label. Now, this avant-garde developer is preparing to create a new global icon, as it invites well-heeled investors and VIP globetrotters to discover the breath-taking “Bay of Icons”.

Nestled on Phuket’s stunning sunrise coast at Ao Po, overlooking the breath-taking seascape of Phang Nga Bay, the Bay of Icons is set to become a highly desirable destination for affluent investors and international travellers alike. Covering at least 20 rai (3.2 hectares) of spectacular seafront land surrounding the Ao Po Grand Marina, this idyllic area will be transformed over the next five years under Utopia’s masterplan to create an unparalleled lifestyle and leisure enclave.

Upon completion, the Bay of Icons will be a fashionable community comprising an exceptional collection of chic amenities and bespoke services. High net worth individuals will be able to invest in a choice of premium residences and pristine pool villas, all immaculately designed and fitted to first-class specifications. Many will also showcase panoramic views of Phang Nga Bay.

High-end travellers on short or extended breaks in Phuket will be able to stay in style with a choice of ultra-luxury design hotels. Utopia Corporation is in the final stages of discussion to bring in another iconic high-end fashion branded resort, the first in Southeast Asia, with impending announcements due by April 2021. While construction work on the Tonino Lamborghini Boutique Hotel Phuket will commence in November 2021, with the grand opening scheduled for November 2023. These two legendary brands will exude glitz and glamour, with accommodation and amenities that elevate the Southeast Asian hospitality scene to the pinnacle of exclusivity and excellence.

Hotel guests and residents will be able to stroll past multi-million-dollar mega-yachts on the waterfront promenades of Ao Po Grand Marina, shop in luxury designer boutiques and retail outlets, dine and unwind at a selection of sophisticated restaurants and bars, or play golf at a choice of nearby clubs, including the world-class Mission Hills Phuket Golf Course. Phuket’s Old Town, with its classical Sino-Portuguese architecture and lively markets, is a just a short drive away, and Chalong Bay is a popular spot for water sports, such as kite-surfing.

The Bay of Icons will be easily accessible; VIPs can arrive in style either by air or sea, with the 300-berth marina and a private helipad, and Phuket International Airport is just 30 minutes’ drive away, offering direct connections to many global cities.

“Phuket is a truly outstanding option for upmarket investors. The island’s exquisite natural beauty, easy accessibility and international services have attracted a wealth of investment in recent years, including affluent Asian and overseas residents seeking a spectacular second home or a new life in the sun. With its collection of global brands, including Southeast Asia’s first Tonino Lamborghini hotel, all set against the backdrop of Phang Nga Bay – the scene of so many Hollywood movies – the Bay of Icons is truly unique. This development is set to become the ‘jewel in the crown’ of Thailand’s tourism industry, a new national landmark and one of the world’s most prestigious waterfront destinations,” said Mr. Hachi Yin, Chief Executive Officer, Utopia Corporation.

An exciting and innovative company that strives to rewrite the rulebook, Utopia’s company slogan is “Dare To Dream”.

Having been established in 2015, it has grown rapidly to become one of the largest real estate developers in Phuket, with a collection of hospitality, residential, commercial and entertainment projects across the island. This long with architecture, design, engineering, construction and hotel operation services. It operates three own-branded hotels in Phuket: Utopia Kata, Utopia Loft, and Utopia Naiharn, which was named as Asia’s “Top Emerging Hotel” in the Now Travel Asia Awards.

Executives at todays press briefing
Hachi Yin is Chief Executive Officer Utopia Corporation, not only builds inspirational properties for optimal investments, but is wholly involved in providing finest hospitality via their hotel group, and providing other tourism facilities through Club Utopia.

Hachi is responsible for the company’s dynamic and accelerated growth, from the modest beginnings of the group’s first project, 20-keys Utopia Kata on the island of Phuket, Thailand, to now a key developer of 10 projects on the island with 1,981 keys by year 2022. Utopia Corporation, under his leadership, is also winner of multiple property awards including 2018 and 2019 Dot Property Winner for Best Development and Construction Company, Property Guru 2018 award winner for Design & Construction and multiple awards for FIACBI Prix d’Excellence 2020. In 2019, the flagship property Utopia Naiharn also won Now Travel Asia Award for Asia’s Top Emerging Hotel and many more in between for each individual projects.

An energetic creator who loves to inspire and lead, Hachi is a dream-maker who wishes to make everyone’s dream come true, be it a team member, guest, client or investor, for anyone who Dares to Dream.

Born in China, he relocated to Australia when he was 2 years old, the budding entrepreneurial spirit sparked during his humble childhood, from when he sold second-hand toys, to opening up an eBay business when he was just 12, to founding a telemarketing company before he turned 21.

Hachi is a graduate of Monash University majoring in Pharmacology and Anatomy, and also completed his Certificate in Property Services (Real Estate) from Victoria University.