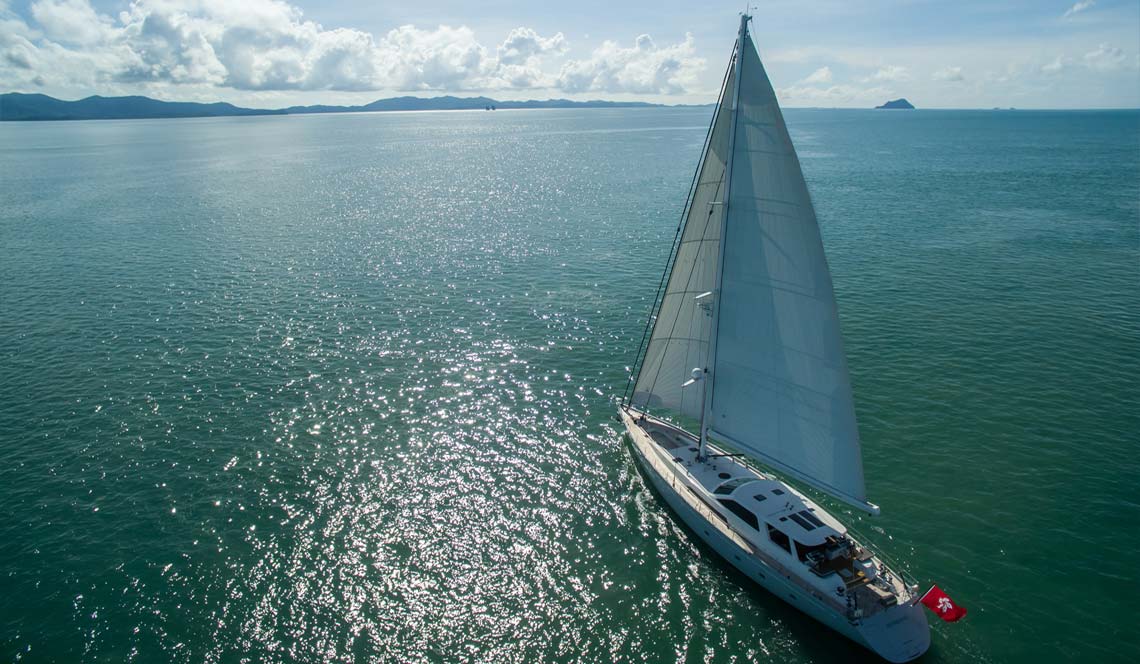 PHUKET: A Superyacht made in Thailand has left Phuket’s shores on a circumnavigation of the World.

It has taken more than three years and 375 workers to build, but at last the Super Yacht Silver Lining has begun its round-the-world voyage.

Formerly one of Hong Kong’s most successful food and beverage entrepreneurs – with 37 restaurants, clubs and factories when he sold his company in 2006 – Chris knows what it takes to build something from nothing.

But his most ambitious venture has been his 31.5-meter yacht, built in the small village of Chebilang, Satun, on Thailand’s southwest coast.

“Many in the yachting community said this standard of yacht could not be made in Satun… I take a lot of pride in proving those people wrong,” Chris said.

Silver Lining is not just a triumph for the Lenz family – and their home for the next two years on the world’s seas – but also a shining example of southern Thailand’s yacht building capabilities.

“This is the first-ever yacht built in Thailand to achieve the American Bureau of Shipping Maltese Cross, the highest standard they have,” Chris said.

If Silver Lining were to be built in Europe, Chris said the cost would have been more than US$20 million (600 million baht), but building in Satun saved him millions of US$ in production costs.

Building Silver Lining has been a monolithic challenge and a logistical minefield in bringing all the parts of the building process together.

After scrapping plans to build a 30 meter catamaran, Chris found the unfinished hull of Silver Lining sitting in a shipyard in northern China, while searching an Israeli website.

Shipping it out of China, and trying to find a place to build his new boat, took time.

“I went to Taiwan and a few shipyards in southern China; either they couldn’t handle a hull this big or they wouldn’t do it.

“Finally I went to Satun, because there was a similar size boat being restored there, so I knew they could handle the size.”

But when Chris visited the shipyard, he found there was a canvas roof being used to shelter the boat building projects. This wouldn’t do.

So he constructed his own building for the Silver Lining project and put his team to work.

No money changed hands with the owner of the shipyard; instead, a simple deal: When Silver Lining was finished, the building would transfer to the shipyard’s ownership. Simple.

But the next chapter in the story of Silver Lining was anything but simple.

After transporting the hull from China on a Russian cargo ship, and then towing it with a 14-meter sailboat from Malaysia to Thailand, Chris was vexed to find the hull was leaking.

Some seven months later, with the hull fixed and a new roof over the project, a team of 110 full-time employees were working around the clock on Silver Lining. Most of the team were Phuket locals and expats.

Chris said they even had local egg and roti naan bread vendors who turned up each day to sell their goods.

Silver Lining launched from Satun on January 20 this year and arrived at Yacht Haven Marina in Phuket in March.

At the time of writing, the crew of nine was making final preparations to leave Phuket.

Silver Lining will first head to Langkawi and then on to Singapore and Bali before setting sail to Christmas Island and Mauritius.

The crew will anchor off the coast of South Africa from late November to March. Then it’s off to the world’s second oldest British colony and the death place of Napolean Bonaparte, Saint Helena Island in the south Atlantic.

After island hopping in the Mediterranean and then navigating across the Atlantic from the Canary Islands to Venezuela, the crew will set a course for the Caribbean, Miami and then Canada.

Chris said that sailing down the Saint Lawrence Seaway and returning to his hometown of Thunder Bay, Canada, will be the highlight of the trip for him.

He has even reduced the mast height of Silver Lining so it can get under bridges on this leg of the voyage.

“This will be the biggest ever single-mast sailboat to go down the Saint Lawrence,” he said.

When they arrive back in Phuket in 2013, the Lenz family plans to move into one of their new homes being built on the fringe of Loch Palm golf course.

And for Chris, there is no intention of rushing back to work.

“We will come back to Phuket to live, but what will I do when I get here? I love having no idea,” he said.

Now Available for charter by www.charter.docka.cafe

The Mergui archipelago is a string of some 800 almost completely deserted tropical islands off the coast of Myanmar in the Andaman Sea. For almost 50 years following Burma’s independence, the Mergui Islands were off limits to the outside world, frozen in time due to the Burmese government’s isolationist policies. As an indirect result, the islands were handed back to the indigenous Moken, a people of Sea Gypsies who have lived a semi-nomadic sea dwelling lifestyle for centuries, surviving off the land and bartering fish and sea cucumbers. A remarkable combination of ethnicities in Myanmar results in a diverse and contrasting people. At Moken villages, visitors can observe the locals crafting dugout canoes with traditional techniques used for thousands of years, and taste specialties such as fresh cuttlefish. But sailing in Myanmar isn’t just about fascinating communities; the Mergui islands distinctive landscape is characterized by jungle-clad hills, lagoons, rivers and mangroves. Wildlife thrives, with monitor gibbons, civet cats, monitor lizards, pythons and mouse deer inhabiting the tropical forests alongside a plethora of birds including hornbills, white kits, kingfishers, emerald doves and sea eagles. This forgotten wilderness is sometimes dubbed “the lost world” and not without reason; it’s a veritable paradise, where cruising gives access to spectacular natural wonders, endemic wildlife and interesting culture alike.

Upon arrival, you will be met by a representative and transferred to the harbour to board your private yacht. After a safety briefing, you can relax on deck with a welcome drink as the yacht sets sail into the Mergui Archipelago, bound for Barwel Island, where we will anchor for the night in a peaceful cove – and make our first contact with the sea and the beaches of the Mergui.

Early this morning the yacht will cruise north to ‘115’ (named after its elevation above sea level) where you can enjoy swimming and snorkeling in a pristine environment and go ashore to stroll along the deserted beaches of fine white sand. In the afternoon, we will pay a visit to the Moken settlement on Bada. These ‘sea gypsies’ have had their traditional nomadic lifestyle restricted by the government but they remain a fascinating community with a unique knowledge of their environment and survival skills.

Sailing a few miles to the north, along the western coast of East Lampi, we will anchor near the mouth of a mangrove fringed river in perfectly calm waters, ideal for waterskiing, with a long stretch of white sands in the background. Some may enjoy watersports upriver and can be joined by others exploring in the tender on a high or rising tide. Later we will sail to Tar Yar and anchor there for the night.

A unique area in the Mergui comprising some 20 islands separated by shallow channels and fringed by mangroves, these islands are teeming with wildlife such as monitor lizards and giant fruit bats. It is well worth exploring here as visitors seldom disturb this region. Blue spotted rays and turtles swimming in a few feet of water can be seen from the surface, and at dusk, scores of Hornbills can be sighted flying back to the island.

After breakfast, the yacht will take a short cruise to Salet Galet, the narrow channel separating Lampi Island from Wa Ale Kyun. This whole area is outstandingly beautiful. Exploring up the river into the interior you will find yourself in an ancient rainforest full of sights and sounds. For trekking lovers a 3 to 4 hour jungle trek up the west peak of Lampi will bring you, under the guidance of a local guide, to a spectacular viewpoint overlooking the lagoon and the wooden huts of another Moken community.

Early this morning the yacht will cruise to Clara Island. You will immediately be thrilled by the natural beauty of Clara and her magnificent beaches. The water clarity is such you can see the bottom in more than 20m of water. On one of the beaches, a spectacular waterfall of cold mountain water tumbles right down to the sea. Clara is rated as one of the most beautiful islands in the south Mergui and well worth spending a day diving, snorkeling, exploring.

Today, the yacht will sail to Peaked Island (Nga Mann) for some great snorkelling just off the pure white sandy beach. Later, experienced divers will have the opportunity to explore Shark Cave so known for its resident nurse sharks; the highlight is a swim through at 18m depth. Non-diving guests may wish to remain on Nga Mann and explore the island renowned for its wild life. A very rare species, the Andaman pigeon, can occasionally be sighted on this island. This afternoon, the yacht will anchor off the southwestern beach.

Cavern Island, so called because of the cave accessible at water line, is a great place for all kinds of watersports – flat calm waters, snorkelling spots, caves to explore. High rock, 3 miles to the east, is a small islet with a single tree, remarkable for the sheer volume of fish that congregate there. With little current affecting the reef, this is a dive for all levels. Later in the afternoon, we will backtrack to the southeastern creek on Loughborough. Nice scenery, exploration by tender, primeval forest and a wild but peaceful anchorage.

The only island with a ‘resort’ (some low key timber chalets hidden among a coconut grove) MacLeod offers a deep and sheltered bay in the south with stunning scenery that can be fully appreciated from the top of the hill after a short trek. The bay offers good snorkeling and trekking through to other beaches, one known as ‘nautilus’ beach for the shells that can be found there. We will set sail in the afternoon, taking advantage of the breeze to proceed to the southernmost bay of Matthews Island (Za Det Gyi) and anchor there for the night.

The last dive of the cruise, but definitely not the least, the Western Rocky islands offer an overwhelming choice of wall diving, pinnacles and an impressive 30m passage through the island starting at 17m and ending at 24m. To describe the dive options would be the subject of a separate leaf. One cannot leave the Merguis without having explored Cock’s Comb, a hong (karstic cave the ceiling of which has collapsed) turned lagoon, accessible through a gap at low to 3⁄4 tide.

Today, the yacht will return to Kawthaung where the crew will assist you with disembarking and transferring to the airport for your flight home.

Please note that all itineraries are subject to change, depending on weather conditions, progressing harbor clearances, changes to domestic flights and other deciding factors. Please contact info@charter.docka.cafe to discuss your requirements.