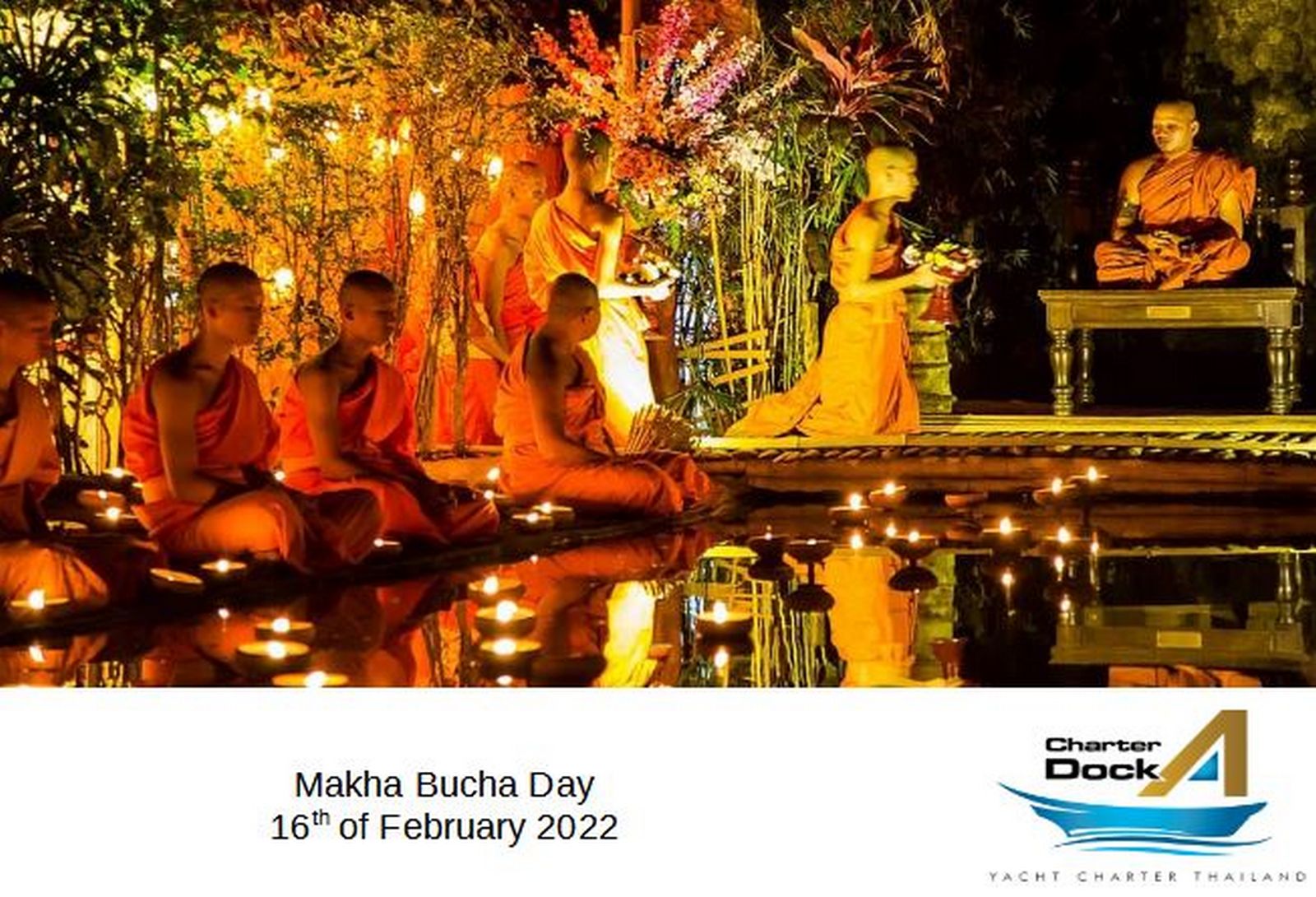 Happy Makha Bucha 2022 – Buddhist days make up a number of the public holidays on the Thai calendar and among them is Makha Bucha Day. In 2022, Makha Bucha Day falls on Wednesday 16th February. However, what is the story behind Makha Bucha Day, and how can you observe it while you’re in Phuket or other parts of Thailand?

Here’s all you need to know about this significant occasion in the varied and colourful Thai Buddhist calendar. Where does the name for the Makha Bucha Day holiday come from? Well, the Buddhist calendar traditionally used in Thailand is a lunar one. The third lunar month is known in Thai as ‘makha’.

The term ‘makha’ comes from the word ‘Magha’ in Pali, the sacred language of the religious texts of the Theravada strand of Buddhism. Meanwhile, ‘bucha’ is a Thai word – once again deriving from the Pali language. This time from the word Puja – which means ‘to venerate’ or ‘to honour’.

What is the History of Makha Bucha Day in Thailand?

As well as Thailand, Makha Bucha Day is celebrated in other countries including Cambodia, Laos, Sri Lanka, and Myanmar. It first came to be celebrated in modern-day Thailand during the reign of King Rama IV. First observed only in the grounds of the royal palace, but later becoming more widely recognised nationally.

However, the origins of Makha Bucha Day itself lay much further back, 45 years before the beginning of the Buddhist era and nine months after the Buddha is said to have achieved enlightenment. Then, on the full moon day of the third lunar month (now known as Makha Bucha Day), Buddhist beliefs hold that a meeting between the Buddha and his disciplines became a momentous and historic occasion.

Including the fact that it already fell on the auspicious occasion of a full moon. The meeting is said to have taken on four remarkable characteristics that are still recounted in Buddhist teaching today. These four elements to the gathering have also given Makha Bucha Day its nickname of the Fourfold Assembly Day.

A total of 1,250 Buddhist Sangha followers unexpectedly visited the bamboo grove known as Veluvana in Kajangala, northern India. Which is where the Buddha was known to have stayed. Each of the 1,250 was an Arahant, enlightened disciplines who had been ordained by the Buddha himself and who were said to have gained insight into the true nature of existence and have achieved nirvana.

To his unsummoned audience, the Buddha is believed to have given important teaching serving as a summary of the core principles of Buddhism. The teaching is known as the Ovadhapatimokha. Also, it is focused on the idea of refraining from evil, doing what is good, and cleansing the mind.

Buddhists believe that the Buddha continued to teach the Ovadhapatimokha for two decades. It was then taken up by the Buddhist Sangha by way of the 227 rules that make up the monastic discipline code observed by fully ordained monks. As such, Makha Bucha Day is also seen as an opportunity to celebrate the formation of these ideas that continue to guide modern Theravada Buddhism..

The history doesn’t end there, though. 44 years after the Fourfold Assembly on the original Makha Bucha Day, the Buddha is said to have announced that within three months he would die and achieve nirvana. That would happen on the full moon day of the sixth lunar month, now known as Visakha Bucha Day and a Thai public holiday in its own right.

How is Makha Bucha Day in Thailand Celebrated Today?

Although Thailand has no official state religion, Theravada Buddhism is by far the majority faith observed by the Thai population. And so significant Buddhist occasions like Makha Bucha Day figure prominently on the country’s calendar. Makha Bucha Day is a public holiday across Thailand. The occasion is observed in a number of ways by lay Buddhists in local communities.

As is common on all manner of Buddhist holidays in Thailand, Thai Buddhists visit their local temple to make merit on Makha Bucha Day. While at the temple, they might listen to Buddhist teachings, give alms to monks, and recite Buddhist scriptures. It is common to participate in an evening candlelight processions around the ordination hall of temples.

Other ways in which practising Thai Buddhists mark Makha Bucha Day in Thailand include strictly observing the five Buddhist precepts for the day. These are not harming living things, not taking what is not given, refraining from sexual misconduct, avoiding telling lies or participating in gossip, and abstaining from alcoholic drinks and recreational drugs.

This is why you might well find that bars around Thailand are closed on Makha Bucha Day. The Thai government restricts the sale of alcohol, albeit inconsistently, on various religious holidays.

In line with the precept to avoid harming living things, strict practising Buddhists also refrain from eating meat on Buddhist holy days. But even those who practise their own looser, more relaxed form of Buddhism might abstain from animal-derived food products on Makha Bucha Day. Indeed, the most deeply religious Buddhists might even take the opportunity of Makha Bucha Day to observe the fuller set of eight precepts.

How Can You Observe Makha Bucha Day in Thailand?

If you want to get your own insight into local celebrations of Makha Bucha Day in Thailand, simply stop by the local temple closest to you. Most will be happy to welcome inquisitive souls and to let you observe – or even participate.

Luxury made Personal by Charter Dock A Thailand