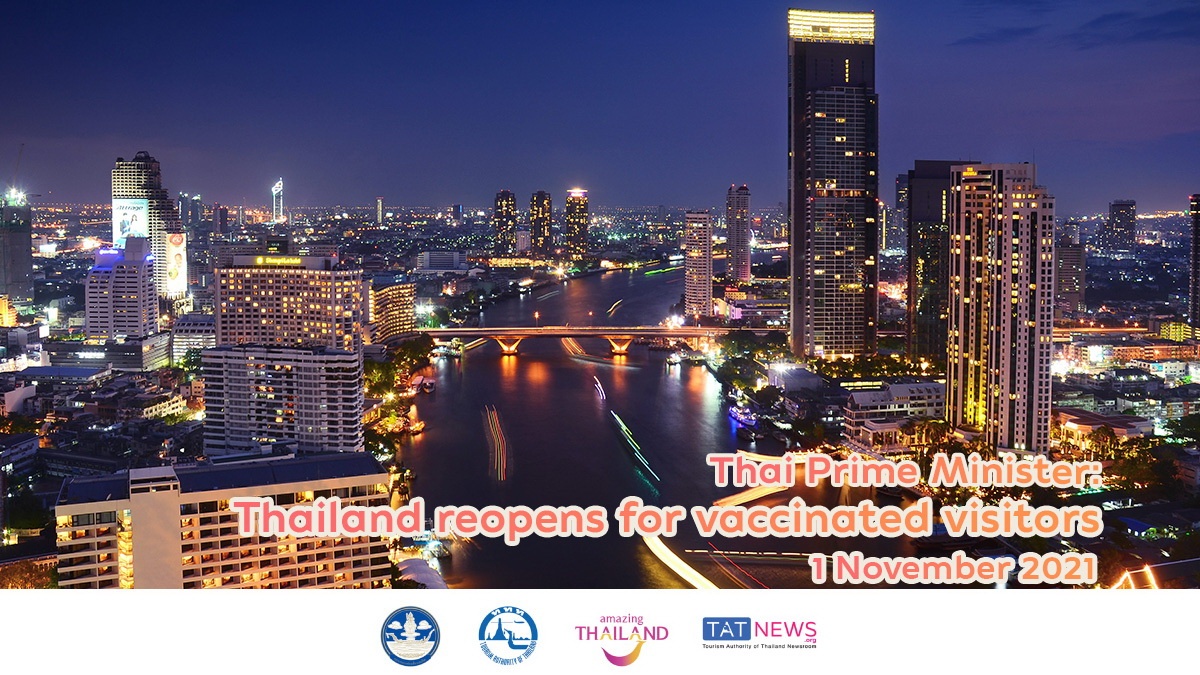 Consumption of alcoholic beverages in restaurants and reopening of entertainment venues will be allowed from December.

In the initial phase, Thailand will allow fully vaccinated travellers from at least 10 low-risk countries, including China, Germany, Singapore, the UK and USA. The list will be expanded from 1 December, and further enhanced to a very extensive list from 1 January.

Under the plan, fully vaccinated foreign visitors from the approved countries will need to show that they are COVID-free at their time of travel with an RT-PCR test undertaken before they leave their home country, and do a test in Thailand, after which they will be free to move around Thailand in the same way that any Thai citizen can do, the Prime Minister said.

Visitors from countries not on the list, will, of course, still be much welcomed, but with quarantine and other requirements.

In addition, the Prime Minister said consumption of alcoholic beverages in restaurants as well as the operation of entertainment venues under appropriate health precautions would be allowed from 1 December.

Below is the full speech by the Prime Minister.

National Address of the Prime Minister of Thailand

My fellow citizens, brothers and sisters:

In the last one-and-half years, we have lived with some of the greatest peacetime challenges our country has ever faced in its history, brought about by the COVID-19 pandemic, and one that has left nobody untouched and no country in the world undamaged.

It has been one of the most painful experiences in my life, too: to make decisions that balance the saving of lives with the saving of livelihoods – a choice that is not always clearly separate, and where we may save lives, but commit those lives to the unbearable pain of trying to survive with little or no income; or where we may save livelihoods but commit one’s family, friends and neighbours to loss of life and the loss of their breadwinner.

In facing this terrible choice, it was my decision that we could not allow a slow, wait-and-see approach to confronting the pandemic and let it claim the lives of so many of our countrymen and women, as we, ultimately, saw happen in so many other countries.

As a result, I acted decisively on the advice of many of our outstanding public health experts to make our country one of the first in the world to move quickly with lockdowns and tight regulations.

With the collaboration of all sectors of society, and with everyone joining hands to face this crisis together, we have been among the most successful countries in the world in saving lives.

But it has come at very great sacrifices of lost livelihoods, lost savings, and destroyed businesses – what we have all given up so that our mothers, fathers, sisters, brothers, children, friends and neighbours may live for today.

The threat of a large scale, lethal spread of the virus in Thailand is now diminishing, even though the risk of resurgence is always there, and even though there are still serious constraints on our hospital and medical staff capacities.

The time has come for us to ready ourselves to face the coronavirus and live with it as with other endemic infections and diseases, much as we have learnt to live with other diseases with treatments and vaccinations.

Today, I would like to announce the first small but important step in decisively beginning the process of trying to restore our livelihoods.

With these developments, we must act quickly but still cautiously, and not miss the opportunity to entice some of the year-end and New Year holiday season travellers during the next few months to support the many millions of people who earn a living from our tourism, travel and entertainment sectors as well as the many other related sectors.

I have, therefore, instructed the CCSA and the Ministry of Public Health to urgently consider within this week to allow, as of 1 November, international visitors to enter Thailand without any requirement for quarantine if they are fully vaccinated and arrive by air from low-risk countries.

All that visitors will need do is to show that they are COVID-free at their time of travel with an RT-PCR test undertaken before they leave their home country, and do a test in Thailand, after which they will be free to move around Thailand in the same way that any Thai citizen can do.

Initially, we will begin with at least 10 countries on our low-risk, no-quarantine list, including the United Kingdom, Singapore, Germany, China, and the United States of America, and enlarge that list by 1 December, and, by 1 January move to a very extensive list.

Visitors from countries not on the list, will, of course, still be much welcomed, but with quarantine and other requirements.

By 1 December, we will also consider allowing the consumption of alcoholic beverages in restaurants as well as the operation of entertainment venues under appropriate health precautions to support the revitalisation of the tourism and leisure sectors, especially as we approach the New Year period.

I know this decision comes with some risk.  It is almost certain that we will see a temporary rise in serious cases as we relax these restrictions.  We will have to track the situation very carefully, and see how to contain and live with that situation because I do not think that the many millions who depend on the income generated by the travel, leisure, and entertainment sector can possibly afford the devastating blow of a second lost new year holiday period.

But if, in the months ahead, we see an unexpected emergence of a highly dangerous new variant of the virus, then, of course, we must also act accordingly and proportionately when we see the threat.  We know that this virus has surprised the world several times, and we must be ready for it to do so again.

In mid-June of this year, I had set a 120-day goal for quarantine-free entry into Thailand and to accelerate our vaccinations.

I would like to take this opportunity to recognise the extraordinary achievements of our public health workers, other officials and all citizens for their response to my appeal in June.

The fact that we can begin quarantine-free entry in November, and despite many countries still trying to contain Delta variant infections with restrictions on the travel of their citizens is a great tribute to the unity of purpose and determined response to my appeal by the public health services, by many other government departments, by the private sector, and by the cooperation given by citizens in all matters.

Our nation has performed an extraordinary feat in the last months that we can all be very proud about everyone’s enormous contributions to those achievements.  These achievements, coupled with the gradual relaxation of other countries’ travel restrictions, now enables us to begin the process of quarantine-free entry into Thailand.