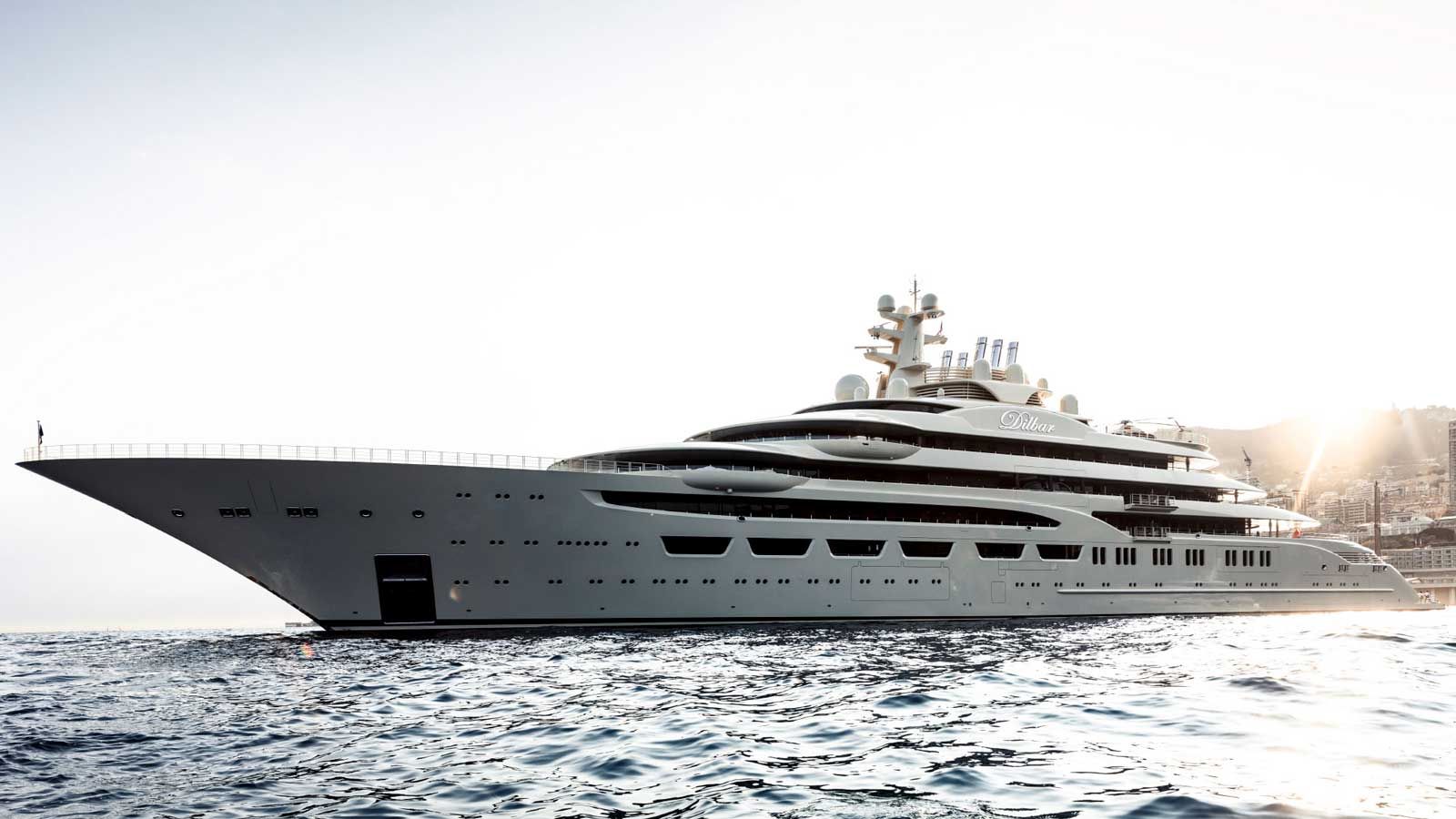 Top 10 BIGGEST YACHTS in the World – 2022, The largest yachts measured by length

Top 10 BIGGEST YACHTS in the World – 2022. In general, the size of a large yacht is measured by its length. But a more accurate factor is the displacement and/or the volume of a yacht.

The yacht Dilbar is currently considered to be the biggest private yacht in the world. With a length of 157 meters (512ft) the mega yacht is number #4 on the ‘list by length’.  But with a displacement tonnage of 15.917 gross tons, she is actually the largest yacht in the world.

Who owns the largest yacht in the world?

A New Top One position?

Soon Dilbar will leave her #1 position as two larger projects are currently under construction. Kjell Inge Rokke‘s yacht REV OCEAN will be delivered soon. And in Germany, a very large yacht (project Blue) is under construction for Sheikh Mansour al Nahyan. She is reportedly 160 meters long.

Only the world’s richest billionaires are able to purchase and maintain these big private yachts. Read our list of the World’s Richest Yacht Owners.

Most of these yachts are owned by Royal Families. Such as the Al Nahyan family, rulers of Abu Dhabi, who own four of the world’s largest mega yachts. And the Sultan of Oman, who owns two.

What is the Displacement of a yacht?

Material may not be published, broadcast, rewritten or redistributed without a link to the original content.

(*) There is ‘discussion’ whether Fulk Al Salmah can be considered a real yacht, or that she is a navy vessel. She is legally owned by the Royal Navy of Oman. She escorts the yacht Al Said, and she is crewed by the navy.

The yacht Azzam is considered to be the World’s largest yacht.

Azzam was built by luxury yacht builder Lürssen for an estimated build price of US$ 400 million. Her exterior design is done by Nauta Yachts.

She is powered by two gas turbines and two diesel engines. She can reach a top speed of 30 knots.

The yacht Eclipse is known as ‘the $ 1.5 billion yachts’, which would make her the most expensive yacht. Although her real cost price was considerably less.

Her original contract price was around EUR 400 million, or USD 500 million. Superyacht Eclipse was the largest private yacht in the world. But this title is now reserved for superyacht Azzam.

The yacht Eclipse is owned by Russian billionaire Roman Abramovich. He is one of the richest people in the world. Eclipse has two swimming pools and two helicopter pads. She has a crew of 70. Eclipse was delivered by Blohm and Voss in 2010.

The yacht Dubai is the royal yacht of Sheik Mohammed bin Rashid al-Maktoum. The yacht is more or less permanently based in Dubai. The yacht is often used by his children.

Built for Prince Jefri of Brunei

The yacht was originally commissioned at Lurssen Yachts by Prince Jefri of Brunei. The project was abandoned in 1998. In 2006 she was finished by Platinum Yachts, on behalf of the Dubai Government. The yacht has accommodations for 24 guests and has a crew of 115.

Inside the yacht Dubai

The yacht Dilbar is actually the largest private yacht in the world, measured by displacement. This means she has the biggest interior and the highest volume.

She is also considered to be the most expensive luxury yacht. With an estimated cost price of US$ 600 million.

She is built by Lurssen for Russian billionaire Alisher Usmanov. She is a replacement for his ‘smaller’ 110-meter Dilbar (now Al  Raya). Alisher Usmanov is one of Russia’s richest men with a net worth of US$ 13 billion.

He is the majority shareholder of MetalloInvest and he also owns Mail.ru. Russia’s number one Internet company.

Al Said was built for his predecessor: Qaboos bin Said Al Said. He died in 2020.

The yacht can accommodate 65 guests and 140 crew members.

Sultan Al Said owns several yachts, including the Fulk Al Salamah. At 150-meter she is almost as big as Al Said, but acts as her support yacht. She #6 in our ‘List’Al Said

The yacht Fulk Al Salamah is the support vessel for the Sultan of Oman’s main yacht Al Said.

Fulk al Salamah means ‘Ship of Peace’. The assumption of her use as a support vessel is due to a lack of exterior space on board. She is often seen together with Al Said.

Not much is known about Fulk Al Salamah and ever her length is not sure.

The yacht A+ is owned by Mansour bin Zayed bin Zayed Al Nahyan. He is Deputy Prime Minister of the United Arab Emirates.

Half-brother of the President of the UAE

He is the half-brother of the President of the United Arab Emirates. Khalifa bin Zayed Al Nahyan, owner of the yacht Azzam (See #1 above).

Topaz was delivered by Lurssen in 2012. Not much is known about the yacht. But she is frequently used by the Al Nahyan family. In June 2014 Leonardo Do Caprio was spotted onboard. During the football world cup in Rio de Janeiro.

In 2019 her name was changed into A+, but she is still owned by Sheikh Mansour.

The yacht Prince Abdul Aziz is assumed to be the official Royal Yacht of the King of Saudi Arabia. Most of the time she is based in Greece. Where many Arab royals berth their yachts.

But when traveling she can often be found near Marbella Spain. Or in Antibes France, where the Saudi King owns summer palaces.

Inside the yacht Prince Abdulaziz

The yacht El Mahrousa was built in 1863 as the Egyptian Royal yacht for Khedive Ismail Pasha.

El Mahrousa is the oldest active superyacht, and is cared for by the Egyptian navy. She rarely leaves her home berth. Not more than 3 times a year. The movie (under) has some rare interior photos. The # 10 on our list is the yacht Yas. She is owned by Sheikh Hamdan.

She is the 3rd yacht in this top 10. She is owned by the same Al Nahyan Family, just like Azzam and Topaz. Sheikh Hamdan is a half-brother of the current Emir and UAE president Khalifa bin Zayed Al Nahyan.

Yas was originally a Dutch navy frigate, known as the HNLMS Piet Hein. She was converted into a yacht at Abu Dhabi MAR to a design of Pierrejean Design Studio. We think she is not the prettiest yacht around. But she is a head-turner. Unfortunately, she rarely leaves the UAE